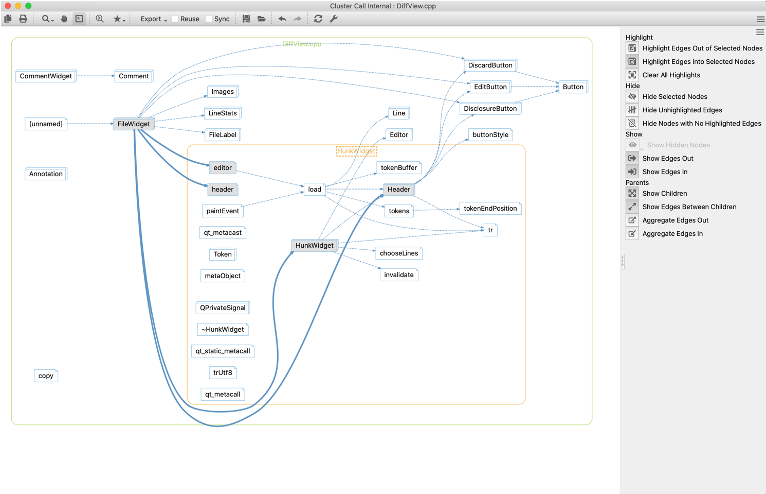 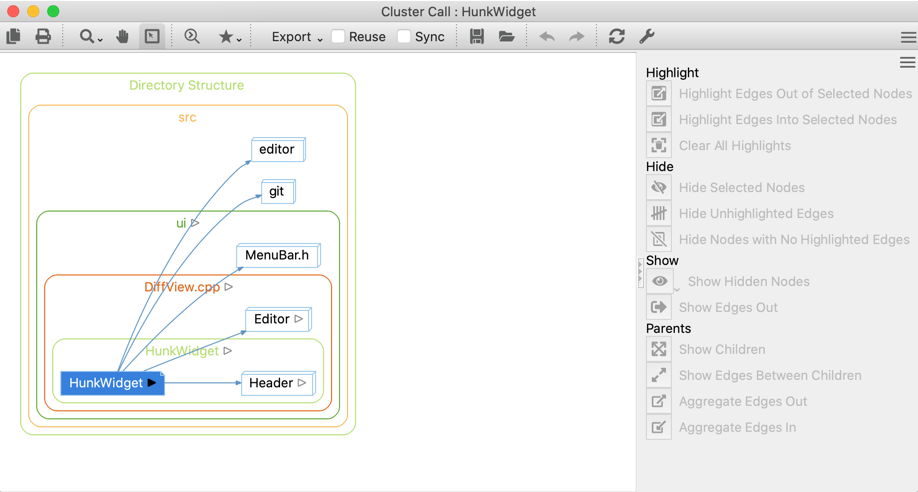 In contrast, the nodes in edge graphs are determined by the visible edges. The cluster call graph shown above (from the GitAhead sample project) is one example. In edge graphs, the initial node starts with edges visible and turning on additional edges expands the graph. Edge graphs have indicators to show when there are more edges available.

For simplicity, the examples here are going to start with clustering turned off. Clustering is a right-click menu option in the cluster call graphs. To turn off clusters in a call graph, aggregate nodes by function. 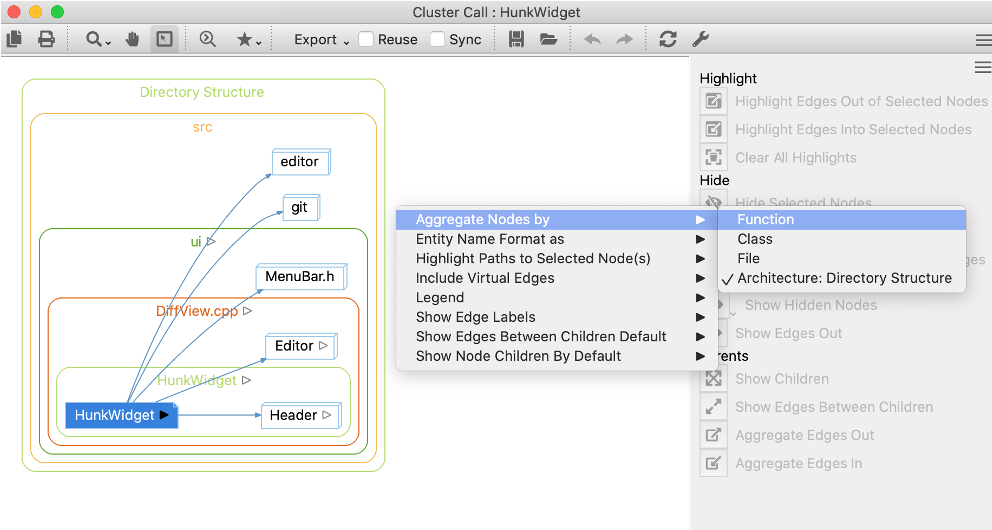 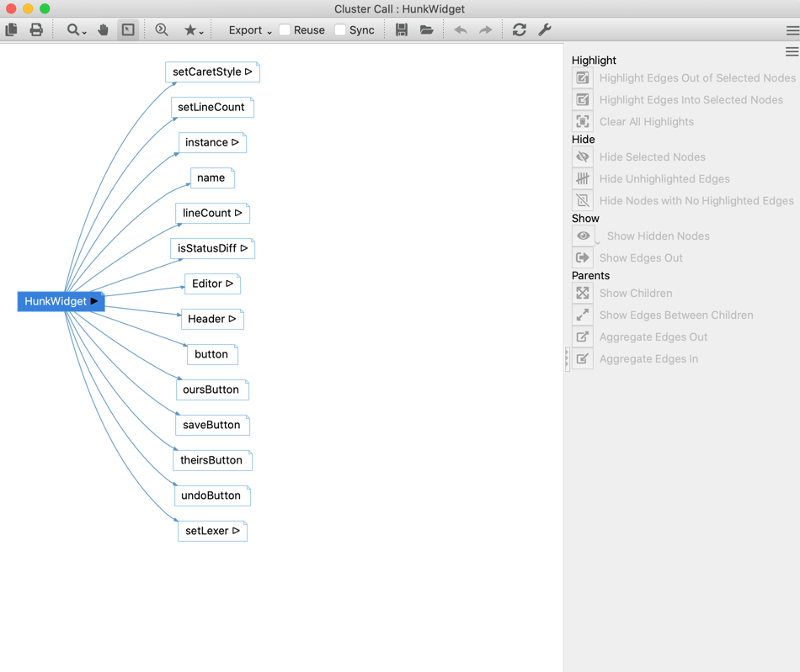 Clicking an arrow is equivalent to toggling the corresponding “Show Edges” button. 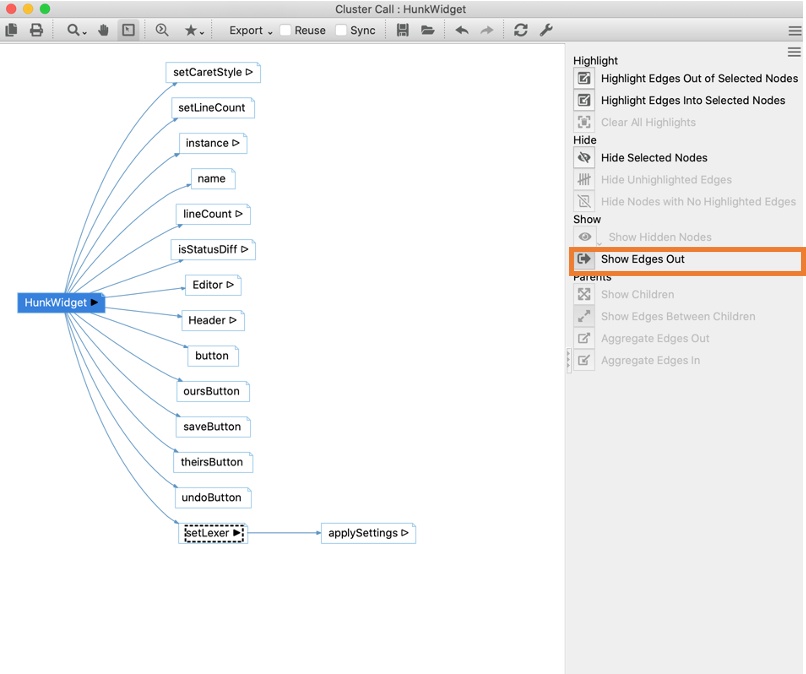 However, the “Show Edges Out” (and the “Show Edges In” button on callby graphs) are not the only node options that can change visible edges. For example, nodes can be hidden. 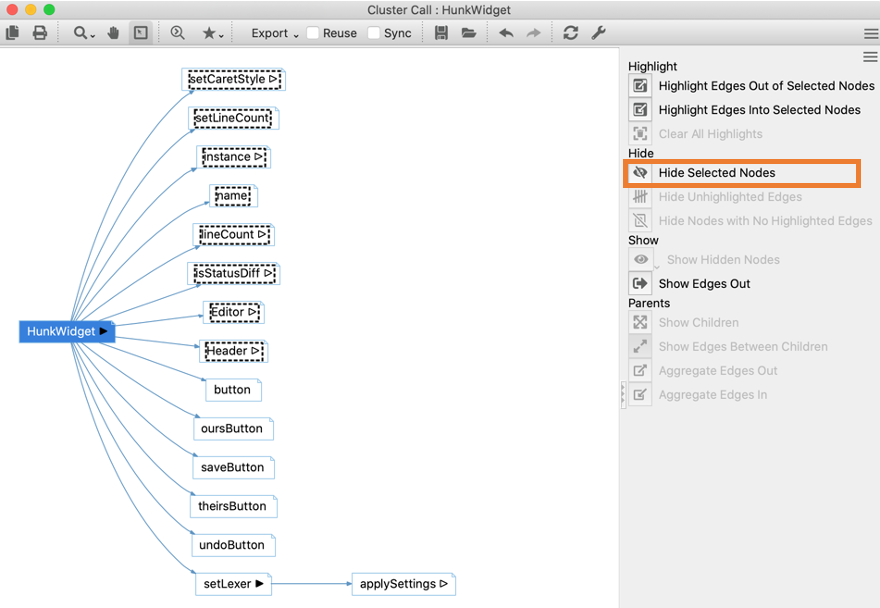 This changes the arrow on HunkWidget. 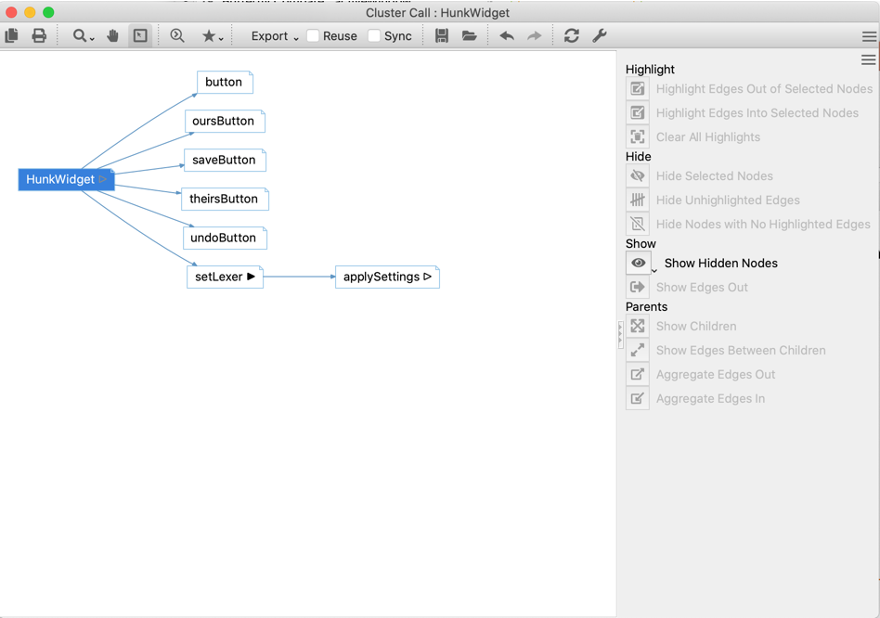 The arrow is now empty instead of filled because there are additional calls that aren’t visible. The arrow also changed from black to gray. Black arrows are strong arrows, meaning that the “Show Edges” option on that node is being respected. Gray arrows are weak arrows and indicate that the node is not in control. In this case, HunkWidget is showing edges out but some edges out are not visible because nodes are hidden. So, the “Show Edges Out” option is weak. Clicking the arrow of a weak indicator will still toggle “Show Edges.” 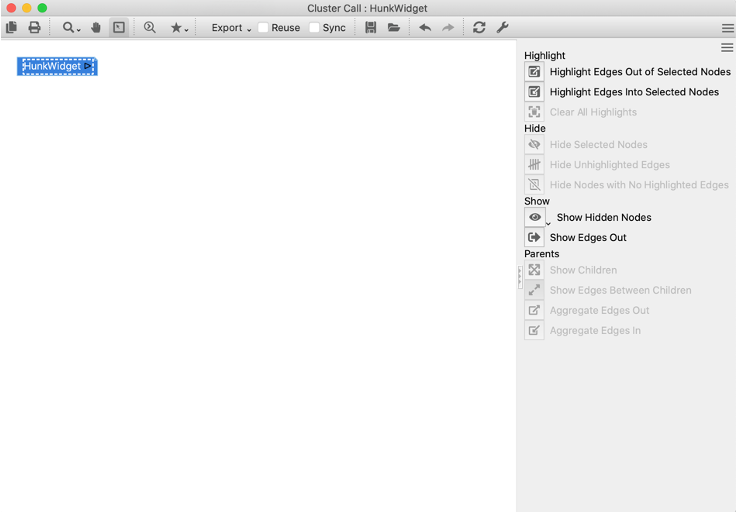 Now Hunk Widget is not showing edges and no edges are visible, so the arrow is black (the show edges setting is being respected). The only way to restore the missing edges on a weak indicator is to change the options that are overriding the “Show Edges” option. In this example, the hidden nodes would have to be shown.

The “Hide Node” option used above is one example of an option that can change edge visibility and make the “Show Edges” option of a node weak. With clustering, there are more ways the “Show Edges” indicator can become weak. For the example, turn clustering back on. 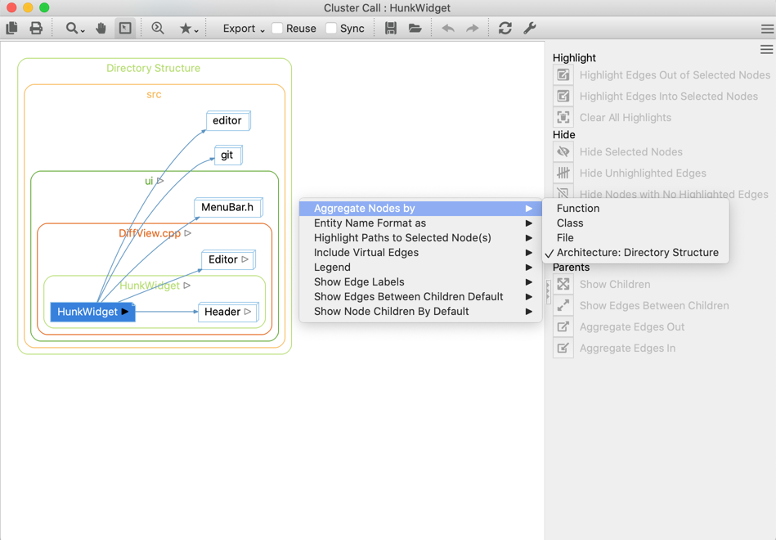 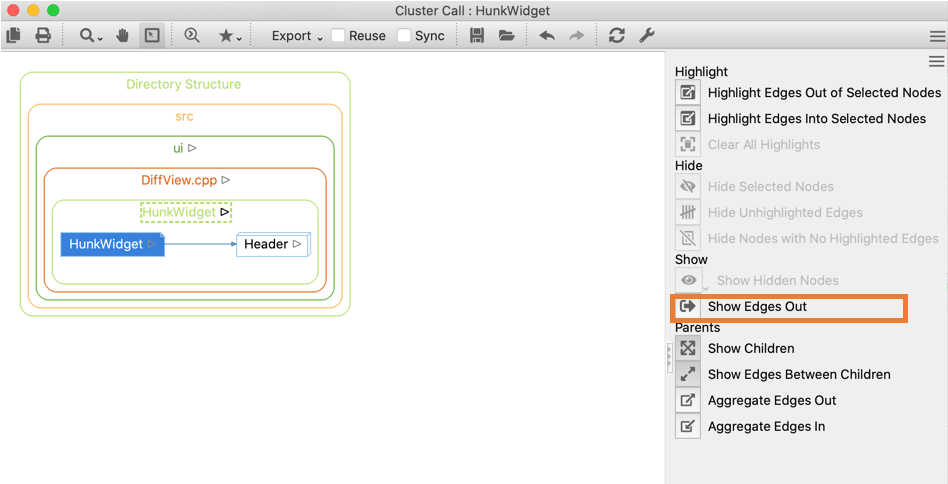 In Butterfly Graphs (which allow control over both edges in and edges out), an edge is visible if the function making the call is showing edges out, or the function being called is showing edges in. This results in another state: the filled gray arrow. In the example below, the Editor constructor is not called by any other functions so all edges in are visible. However, the Editor constructor isn’t actively showing edges in, so the arrow is weak indicating that the visible edge isn’t being controlled by the Editor Constructor. 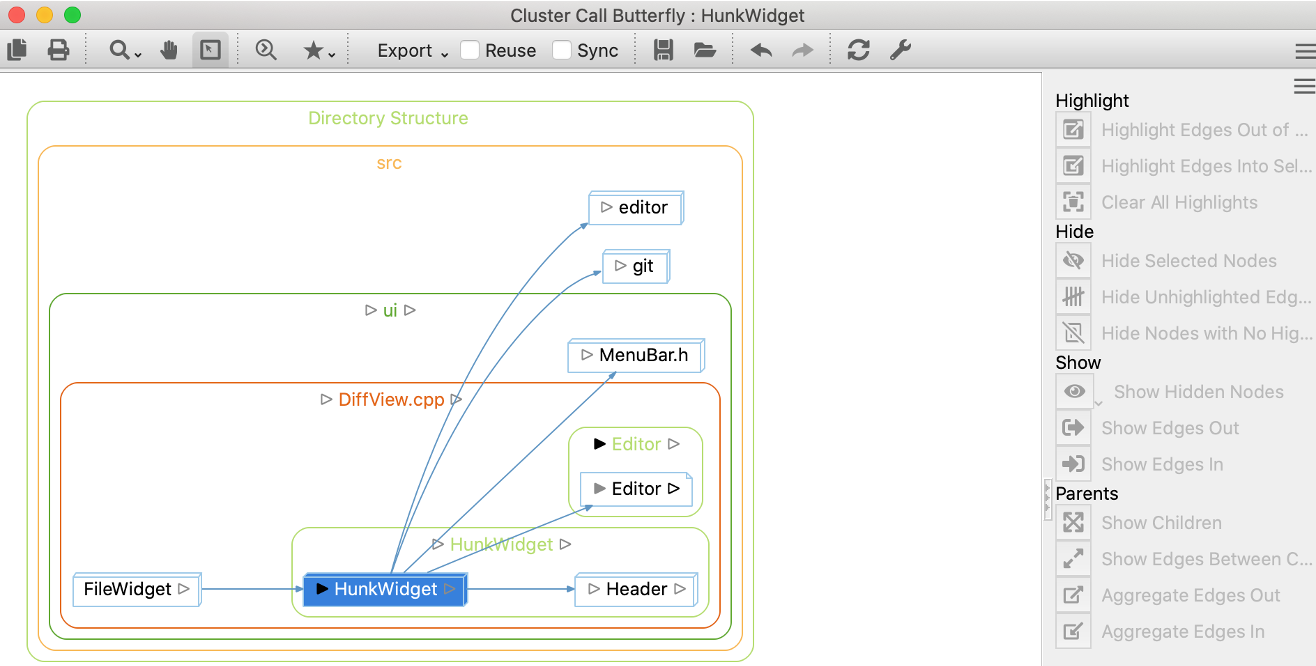 The examples above have covered cases where the edges out shown can become weak. Here is the complete set of rules for when an edge is visible. An edge between A and B must meet all the following requirements:

Did you find it helpful? Yes No

Send feedback
Sorry we couldn't be helpful. Help us improve this article with your feedback.